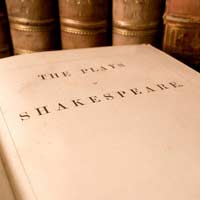 There are some authors with whom every writer should become acquainted. Many have long-ago shed "this mortal coil" (so sayeth number one, below), while others are still living and producing interesting works that keep bookstores afloat.

Obviously, your tastes will differ from others'; however, in the interest of giving you a starting point, we've arranged a top ten famous author listing. If you're not familiar (or only a tad familiar) with any of the writers below, it's time to head to your nearest library.

Ah, The Bard. This "Renaissance Man" was truly prolific (though if you believe some skeptics, he never existed at all, was the pseudonym for someone else or was perhaps the moniker under which a group of authors published.)

Chances are strong that you've read or seen at least one of his plays, but if it's been a while since you perused a copy of "The Tragedy of Hamlet" or "Macbeth", it's time to reacquaint yourself with this master of language and storytelling.

True, Orwell (whose real name was Eric Arthur Blair) isn't everyone's taste, especially those who do not share his views on totalitarianism.

But "Animal Farm" and "1984" are exemplary novels that truly get the reader to think more about politics, society and culture.

Like her or not, Ms. Rowling has a style of writing that has launched her into the annals of literary history. Her Harry Potter books have won awards not only for their imagination but also for their strong prose.

Will she secure a spot in a list of famed authors 100 years from now? Only time will tell - but if you haven't yet journeyed into the world she created, it's time.

Kurt Vonnegut, who passed away not long ago, penned both short stories and novels, inviting readers into his sci-fi realms with modern-day undertones.

"Slaughterhouse-Five" is one of his most internationally known books, though Vonnegut has many other works to offer the reader.

Virginia wolf had a unique passion for the written word and enjoyed literary success and accolades for her many works, including "To the Lighthouse", "Mrs. Dalloway" and "A Room of One's Own."

Some have heralded Woolf as a "feminist" before the invention of the word; certainly, her popularity among women and academicians seemed to grow in direct correlation to the feminist movement of the late 1960s.

Like so many of his contemporaries (including the aforementioned Woolf), Hemingway dealt daily with depression. Yet his writings did not suffer as did his body and mind.

Though he's been called somewhat of an acquired taste, if you're just beginning your Hemingway adventure, start with "The Sun Also Rises" or "A Farewell to Arms. You may also be interested in his shorter pieces.

Faulkner's "The Sound and the Fury" and "As I Lay Dying" are two of the most read of his pieces. But please don't stop there.

Your understanding of this Mississippi, United States born writer can only increase the more you get to know about him as well as his southern-influenced literary style.

Ayn Rand is proof that one person can make an enormous splash through the power of his or her written words. A Russian-born writer who immigrated to America, Rand held back nothing and her writing clearly shows her passion.

Truly, "Atlas Shrugged" and "The Fountainhead" are mainstays of any book collection. The time you devote to reading them will pale in comparison to the education you receive as a result.

Did you read "Ulysses" in school or while at university?

Plenty of students did, but most would do well to revisit Joyce's most renowned work. Time will not have changed the words, but it makes all the difference in the interpretation.

"The Catcher in the Rye" is one of those novels that's unforgettable. For its time, it was a bit racy; however, chances are good that unless you've been living under a rock, you'll find it tamer than those who read it in first-runs.

Salinger manages to capture the essence of an era and weave it into a story that has stood the test of time.