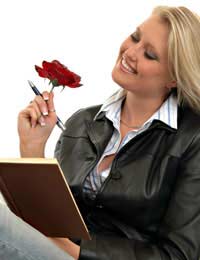 There is probably no literary genre better at dividing people than the romantic novel. But love it or hate it no-one deny that romances have shown a strong presence and remarkable staying power in the world of fiction.

The romance novel was primarily developed in Western culture and focuses on the romantic love between two people, how their relationship develops and how they overcome obstacles to come together. The conflict and dramas in the story are always related to the core theme of romantic love although the romance novel can have subplots that do not directly relate to the main relationship. In general, it is expected to have a "happy ending" - i.e. one that is emotionally satisfying and optimistic and where the hero and heroine live happily ever after. However, some famous romances - such as Shakespeare's "Romeo and Juliet" do not follow this rule. In fact, tragic romances are quite common and often very popular.

In addition, romances tend to be quite "black and white" where good characters are rewarded and evil ones punished. This leads to many people contemptuously labelling romance novels as shallow and superficial. The trend for much romance fiction to have covers which feature scantily-clad women being grabbed by a hulking male has further raised sarcastic labels, such as "bodice-rippers" - a term now considered offensive by many in the romance industry - and for romance fiction readers to suffer under a cultural stigma. However, fans maintain that they are a wonderful form of escapism and do not have to be "dark and heavy" in order to be worth reading. Furthermore, romances have and do address controversial subjects such as date rape, domestic violence, addiction and disability.

Romances have evolved throughout history, starting from the classics such as Jane Austen's "Pride and Prejudice" and Emily Bronte's "Wuthering Heights" down to the modern "chick-lit" novel, although some would argue that these are not strictly romance novels as the relationship between the heroine and hero is not the core of the story, with the heroine's other relationships with her friends and family often being equally important.

Like many other genres, romance is itself divided into sub-genres: