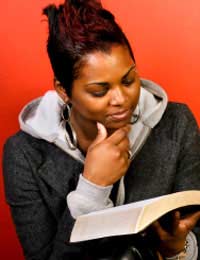 It is no surprise that crime and mystery stories have been among the most popular forms of fiction throughout history and continues to hold that position today with millions of readers worldwide. Thus they are a popular choice for book clubs and in fact there are reading groups exclusively dedicated to this genre.

Man’s fascination with crime and mystery can probably be traced back to the playwrights of Ancient Greece, such as Sophocles, whose plays combining mystery and intrigue enthralled the local citizens. The courtroom drama probably had its roots in the passionate defences of Cicero, a 1st Century BC Roman orator, magistrate, statesman and writer who captivated Romans with his speeches defending accused criminals.

While crime fiction is a genre itself within general fiction, it is often further divided into sub-genres, based on the setting, style of writing, characters and events that traditionally take place.

Reading Plays in Book Clubs
Share Your Story, Join the Discussion or Seek Advice..
Dear All, I hope that you are well. Just wondered please if you might take a look at one of my latest novels, now available on Amazon in both electronic format but also in paperback. SHE'S MISSING By.- K.E. Heaton. Its 1976 and the U.K. is in the middle of a serious and prolonged heatwave when suddenly without warning, two young women go missing on the West Pennine Moors above the old market town of Chorley, in the county of Lancashire. A storyline full of intrigue, suspense and inevitably a good deal of skullduggery. Its free to anyone with Kindle Unlimited and its also completely FREE to download from Amazon onto a kindle or other electronic device, for 24 hours, on Sunday, 18th, April, 2021. Please, if you will, let me know what you think? I'd love to hear from you. Thank you for your time. Kind Regards Keith.
Sid - 17-Apr-21 @ 8:05 PM
Most interesting website. John Waddington-Feather resident in Shrewsbury for the past forty years is a popular British author who belongs to the West Yorkshire ‘school’ of writers.His children’s novel, Quill’s Adventures in Grozzieland, was nominated for the Carnegie Medal in 1989, and his widely produced verse-play, Garlic Lane, won the Burton Award in 1999 and was staged in London in 2011 at the Rosemary Branch Theatre, Islington.In 2002 he was awarded the American DeWitt Romig Prize for his poetry.He was the first chairman of the J.B.Priestley Society and is now a vice-president. In 1985 he was elected a Fellow of the Royal Society of Arts. A school-teacher all his life, he is also an Anglican non-stipendiary priest and was a volunteer chaplain in Shrewsbury Prison from 1969 to 2009, going into prison the odd night after school and helping in the chapel at weekends. From his forty years as prison chaplain he has much material to draw on for his crime novels! For many years he worked as lyricist for the composer, conductor and organist, David Grundy, who died suddenly in 2010. John wrote the words for over 200 hymns and other religious works which David set to music. Many of them were published as collections by Feather Books and used by churches in Britain and abroad. CCLI of Eastbourne are the agents for his hymns and music. .Over the past few years his wide range of work has attracted a growing number of readers in many countries including the USA and more recently in translation in mainland Europe where his short stories are used by the British Council in their BritLit educational scheme to promote contemporary British writing abroad. His very popular Blake Hartley crime novels are already published by Kindle as e-books and more of his work, including his drama and short stories, will appear on Kindle in the future.
Waddy - 15-Jul-13 @ 12:53 PM
Title:
(never shown)
Firstname:
(never shown)
Surname:
(never shown)
Email:
(never shown)
Nickname:
(shown)
Comment:
Validate: