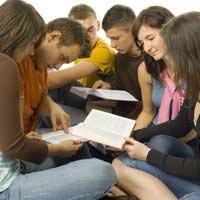 In many cases, making group policy clearly known to new members and firmly impressing the importance of following them can prevent many misunderstandings and awkward situations. Also, have a clear structure for meetings in place and well-defined expectations of all members’ commitment and input so that everyone knows that is expected of them.

It might seem unnecessarily formal but having a leader or host for each meeting can be very useful and prevent a lot of problems. This can be the same person each time, elected by the group, to stand for a set period of time (e.g. one year) or rotate around all the members of the group for each meeting.

A leader will help immensely in keeping a book discussion on track as well as prevent lags in the discussion and keep things moving forward. In any group of people, there will always be those who are comfortable and even keen to express their opinions and those who may be more reticent or even shy but having a leader in charge of the discussion will hopefully balance things out so that no individual can monopolise the discussion too much. Leaders can also remind members that there is no right or wrong in literary interpretation and that all opinions should be respected – this will keep debate enjoyable and prevent the discussions turning into an arguing match!

Members Who Don’t Read the Book

It is important that any new member joining the book club is committed to spending the time to read the selected book or section of the book before each meeting. If they don’t think they can make the regular commitment, they should think carefully about whether they want to join a book club. There is nothing more annoying for reading group members than meeting up to find that half the group have not bothered to read the book and therefore have nothing to contribute to the discussion. Often, in such cases, the social portion of the meetings starts encroaching on the discussion time as the non-readers are keen to divert the group’s attention to other topics and this results in very little book discussion, which defeats the purpose of forming a club and also frustrates the committed members.

Decide on a policy with regards to whether a member would be permitted to attend a meeting if they have not read the book or if they do attend, whether they can participate in the discussions. In many cases, you may find that the “slacker” feels suitably embarrassed and chastened by their lack of commitment and – unless they are a repeat offender – it is usually good to let them attend as normal and to join the discussion as and when they can, by asking relevant questions.

However, while occasional disciplinary action of this sort may keep members on track, you don’t want the book club to seem like homework either or to have to constantly reprimand members. Ultimately, all book clubs are different and although all have a social element, some are more focused and serious whereas others are really more of an excuse for a social gathering. At the end of the day, if many other members in your group seem to have a very casual attitude to book discussions and seem happy with this tone, while you feel very frustrated, then it may be that you are in the wrong sort of book club and the best thing might be for you to look for another reading group to join – one whose style and goals match yours better.

Members Who Dominate the Group

A recent survey showed that over 60% of book clubs suffer from the problem of one member dominating the meetings, often preventing other members from contributing to the discussion. In some cases, it is an occasional occurrence which can be ignored – however, in others, it becomes a serious issue of conflict within the group.

Here are some suggestions to deal with such members: